Dogs Are People, Too! | Dog Personalities An author recently asked for the rationale behind an edit I made to her article. The sentence originally referenced something that worked well “in dogs and people.” I changed the sentence to read “…in dogs and humans.” I explained that “Dogs are people, too!” – but I don’t blame her for her confusion. Language constantly evolves to reflect the knowledge and ethics of the day, and we’ve taken some steps at WDJ that she was unaware of – and some of my writers have taken steps that I’m still not quite ready to take.

In most dictionaries, the definition of “people” implicitly means “humans” – so perhaps my edit was not necessary. But even dictionaries have to be taken with a grain of historical salt! I saw one definition that I scoffed at: “People: Human beings, as distinguished from animals or other beings.” (First off, humans are animals! And what “other beings” was the dictionary referring to?)

But I have a hard time differentiating between “personhood” and “people” – and I agree with the modern behavior scientists and ethicists who think we should extend our definition of “personhood” to our animal companions. There’s a great quote from the famed primatologist Jane Goodall: “You cannot share your life with a dog, as I had done in Bournemouth, or a cat, and not know perfectly well that animals have personalities and minds and feelings.” Goodall started her career in an age when scientists were forbidden to attribute any sort of emotions or intentions to the non-human animals she was observing – this was termed “anthropomorphism” and was deprecated as indicating a lack of objectivity – and she found this limitation ridiculous.

Today, the idea that our animal companions should be referred to with the same terms as inanimate objects (“it”) is preposterous. This is one of the reasons we have always used gendered pronouns for dogs in the magazine (he, she, and if we don’t know the gender, they). And it’s clear to anyone who loves dogs that they also feel love, jealousy, rage, fear, anxiety, sorrow, joy, mischievousness, and more.

If we acknowledge that all dogs (and all animals) have a “personality” – a unique set of behavioral traits, expressions, reactions, and emotions – why can’t they be “people”? Can Dogs Really Be “Behaving Badly”?

Sadly, a lot of dog behaviour is labelled as bad because it is simply inconvenient to the guardian. Such labels... If Tinkerbelle The Dog and Belle The Dog look familiar, that’s because these two New York Papitese dog influencers (Maltese... Losing your dog is hard as he’s one of the closest members of your family so having a memorial service... As the saying goes, “Sh*t happens,” and as every responsible dog owner knows, cleaning up after their dogs is an... Treasuring The Time I Have With My Older Dog Otto

When I take longer or harder hikes now, I have to leave my senior dog, Otto, at home. It’s for... South Korea is poised as the next country in the world to grant animals legal status so that their rights... Lyme Disease in Dogs: What Every Dog Owner Should Know

While Lyme disease is the most common vector-borne disease in the U.S., with 476,000 people diagnosed each year, many pet owners do not know that dogs are also... Some Americans spending more on pet’s food than their own

Adapted from a press release:Six percent of American’s are spending more on pet's food than they do on their own... In a survey conducted by pet CBD oil maker Honest Paws, 68% of respondents said grieving the loss of their... A Dog’s Coat Patterns Hold Clues to Their Wolf Ancestors

New research sheds light on a subset of dog coat patterns. The findings raise new questions about long-held tenets of... 5 Ways to Help Your Dog Live a Longer, Healthier Life

As anyone who has ever lived with a dog will know, it often feels like we don’t get enough time... Well-trained assistance dogs can open the door to increased confidence, independence, and mobility for people living with a variety of... Polish insect-based protein producer HiProMine has secured about PLN 26.1 million (US$6.7 million) in funding from a total of 40... Thankful for Dog Love in Times of Loss

Pam and Dean's dogs are a little lost without Dean. They are making up for it by staying close to... Dogs remember if a person is reliable

New study published in Animal Cognition found that dogs remember whether or not a person gives reliable information about the... 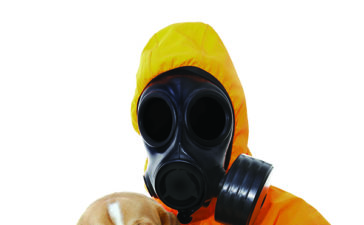 Why Does My Dog Stink?

All joking aside, a dog who smells bad will receive fewer invitations onto the couch (or even into the living... How to Tell if Your Dog is a Genius

Anyone who has lived with a dog will know their capacity for learning the meaning of words, even ones you... Even Puppies Get the Point

Dogs’ ability to understand us and to respond to our attempts to communicate with them has long been considered a...