We Don’t Deserve Dogs: a Film Celebrating the Human-Canine Bond The central message of this film appears in the title. We Don’t Deserve Dogs is a sly way to praise dogs’ loyalty to humans, far beyond what we deserve. Nonetheless, this excellent documentary examines the deep bonds that exist between people and dogs around the world.

The universal love for dogs is beautifully and thoughtfully depicted by these talented filmmakers, who are smart to allow their (human) subjects to do the talking. Through captivating interviews and masterful camera work, they have created a cultural odyssey. Ugandan villager with her canine companion.

The filmmakers, Matthew Salleh and Rose Tucker, traveled to 11 countries, including Chile, Uganda, Nepal, Finland and Romania, to capture intimate portraits of both common and extraordinary relationships between people and the dogs they love. The viewer soon discovers that the U.S. does not have a monopoly on dog love, nor on the ways we indulge our best friends; a dog birthday party in Lima, Peru, makes that point quite clearly. As does footage of the “day of the dogs” in Nepal, an annual event during which dogs are showered with flowers, colorful powders and treats.

In sharp contrast to dogs’ traditional roles in the fields and on farms, the film demonstrates the many ways dogs have been placed into service in the modern world. For example, in Finland, assistance dogs help children learn to read, and in northern Uganda, they comfort former child soldiers suffering from PTSD. The stories are intimate and personal, and so off-the-beaten-path that it’s hard not to wonder how the filmmakers found these people, these dogs.

Another thought on the incongruous title: Perhaps the irony is purposeful, as so many of the film’s stories underscore just how much the people featured truly deserve the companionship of the dogs in their lives. The shared bond they eloquently express is deep; clearly, if anyone deserves canine love, it is these individuals. Their life-affirming connections to the animals are well earned.

Or perhaps the title  is a swipe at the short but disturbing segment toward the end of the film that addresses the Vietnamese dog-meat trade. A purveyor speaks matter-of-factly about the tradition of eating dog meat. This segment is sufficient to underscore the irony of the film’s title. (Note: It begins at 1:07:06 minutes into the film and lasts about five minutes.) There are no graphic scenes and the filmmakers take no position on this cultural tradition; it was included, they say, to show one of the more “challenging” aspects of dogdom.

Don’t allow this distressing dose of reality detract from the documentary’s powerful, moving stories … portraits of dogs’ nobility, spirit and capacity for love. A number of vignettes showcasing the very best that both dogs and humans have to offer will sear themselves into your memory. These emotionally powerful vignettes are further proof that dogs work to make our souls whole, our hearts lighter and our laughter fuller. And in return, they receive our love and gratitude.

The filmmakers said they wished to avoid creating yet another “cute” dog film, and they’ve definitely succeeded. It may be an often-told story for some, but here, the telling is done with great skill and empathy for its subjects. In these days of worldwide conflict and horror, a good dog story is always welcome.

The full-length film has been a popular selection for film festivals around the world, from Warsaw to Cleveland, and has proven to be an audience favorite throughout its festival circuit. The film will soon be available for viewing everywhere.

The filmmakers are providing a special free online screening to the first 200 people who respond with this promo code THEBARK.

To redeem the code:
1) Visit wedontdeservedogs.com
2) Click the “Available on Vimeo on Demand” button
3) When prompted, enter promo code THEBARK to watch the film for free.
Limited to the first 200 users. Sometimes you may find yourself wondering whether you’re part of your dog’s pack. Get your question answered with these ways to know your dog trusts you! How to Be an Eco-Friendly Dog Owner

Did you know how we feed, wash, walk, and play with our pets can have damaging consequences on the planet?... Ways To Protect Your Furniture From Dogs

You love them, play with them, and share the house with them, but they’re tough on the furniture! Here are ways to protect your furniture from dogs. Essential Things To Do Right After Adopting a Dog

You’ve finally done it. You did the research, signed the paperwork, and paid the fee, and now you’re cruising home... Should I Get a Second Dog?

Dear Bark: My dog is getting older, he likes playing with other dogs and he doesn’t like to be left... What do you feed your dog? And why?

The other day, I happened to go into a pet supply store that I had never been in before, and... Charcuterie boards are high on many human foodies’ list. A selection of artfully presented cold cooked meats and an array... 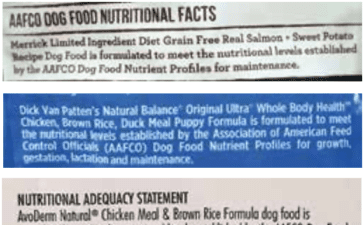 How Long To Feed Puppy Food?

We don't know why the nutritional adequacy statements on the labels of dog foods and doesnt state how long you... Does he look happy in his Ruffwear Load Up Harness? Not particularly - although, of the four products in our... New study published in the journal Animals explored the reasons behind unplanned dog ownership in a sample of people attending... Ever wondered 'can dogs eat asparagus?' Here's what you need to know. Photo: Rasa Petreikiene/Getty Images Ever wondered ‘can dogs... Why Do Dogs Chase Garbage Trucks?

So many dogs—even dogs who are fine with cars and pick-ups—lose it when a garbage truck goes by, or worse,... Cognitive Decline In Aging Dogs: What To Know

Just as humans may develop neurodegenerative conditions such as Alzheimer’s disease as they grow older, our aging canine friends can... Why You Shouldn’t Wait Too Late To Socialize Your Puppy

When you first bring home a new puppy that’s only a couple of weeks old, you’ll likely find it quite... Heading back to the office? You’re not the only one who might be struggling with the fact that your tenure...

We often tend to use our full strength but many dogs find this uncomfortable and intimidating. Something I have been...